"And the stars are projectors, yeah, projecting our lives down to this planet Earth." - Modest Mouse

HERE'S THE NEW URL - please update your links and bookmarks. I don't want to lose any of you.

Finally upgraded my ISP account and installed Movable Type libraries. Everything's working (and it only took a day or so). I still need to tackle CSS to spice it up a bit, but the new blog looks pretty good right now (if I do say so myself). And I've got my own domain now, too. Sweeeeeet.

Thanks to Blogger for giving me a nice place to start, but now the larva has metamorphosed into an even better larva.

I can hear the train wailing through the valley maybe a mile away. A long, dark cry, drawing a line of deep blue night between the redwoods rolling down & out to the coast. This stroke of coal burn is the only echo of blackness on a beautiful sunny Sunday. Indeed, the train itself, if we believe the signs thrown up for this weekend outside of Roaring Camp, is none other than cheery educational steam engine Thomas The Train. Thomas, it seems, in spite of his happy exterior, knows well the loneliness of the rail.

The trees themselves seem to be steadily marching towards the sea, streaming down through hills & valleys, their rooty toes dipped in the cool soft waters of the San Lorenzo River and its myriad web of tributaries. They carpet these lands in fuzzy green shag. On this shaded porch I can feel the gentle breeze stirred up by their movement. With it the sun's force is diminished slightly sparing the garden flowers from certain dessication.

Wind chimes are dancing softly nearby, swaying against each other and gently intoning their musical identity into the fluid air. Their cadence advances and retreats, quickened one moment, silent the next. Washing away, the air brushes branch and shrub, like a chorus of sandpaper underwater or a thousand shakare milling about in a Brazilian rain forest. Birds chirp and tweet and occasionally warble, calling and laughing with each other, perhaps mocking the acrobatic squirrels leaping through the canopy as if they themselves were so fortunate to have wings.

Hyperdimensional electric insect drones cut buzzing through the soundscape. When I look I can see hundreds, if not thousands of bugs making their rounds through the lillys, echinaceas, and naked ladys, each resonant and sensual draped in color, dripping with nectar & pollen. I've read that many flowers have ultraviolet markings visible only to the insect eye. Like cryptic neon club signs they call out to those in the know, the initiated.

Sometimes when the breeze is soft and the air warm, time slows against the rising tide of the eschaton. The seeming acceleration of life reveals itself as a human creation, a byproduct of quicker minds and faster fingers driven towards reunion with the hologram. Days like this remind us that the sun will keep burning, the air will continue moving, water will flow and earth will crumble, long after we've left it all for the infinite eternity of afterlife.

Today, July 23, marks the historical point when the ancient Egyptians believed the connection with Sirius is greatest. It marks the day that Sirius moves out from behind the Sun, having been in conjunction since July 4th. Sirius is shrouded in mystery and refrences to this, the brightest star in the night sky, can be found throughout many traditions. Most notably, to my mind, is Crowley's relationship with the argentum angstrum (Silver Star), and the Dogon people of N. Africa, as documented in Robert Temple's The Sirius Mystery.

According to Temple, the Dogon knew that Sirius had an invisible companion (the white dwarf star Sirius B). "The Dogon name for Sirius B consists of the word for star, tolo, and po, the name of the smallest seed known to them. By this name they describe the star's smallness - it is, they say, 'the smallest thing there is.' They also claim that it is 'the heaviest star' (since in it the element earth is replaced by an immensely heavy metal called sagala), so heavy 'that all earthly beings combined cannot lift it.' And the color of the star is white. The Dogon thus attribute to Sirius B its three principal qualities as a white dwarf: its smallness, heaviness, and whiteness. They go on to say that the start's orbit is elliptical, with Sirius A at one focus of the ellipse, that the orbital period is 50 years (the actual figure is 50.04 plus or minus .09 years), and that the star rotates on its own axis. The Dogon also describe a third star in the Sirius system, called Emme Ya ('sorghum female'). In orbit around this star, they say, is a single satellite. To date Emme Ya has not been detected by Western astronomers."
- Reader's Digest Mysteries of the Unexplained

"The Dogons considered Sirius B to be far more important than its larger and brighter companion. They also possessed knowledge of the third luminary as well as a small planet in the system and there is some confusion as to whether the third star was believed to be a smaller sun or simply a large planet, since this ancient African tribe also made reference to the 'shoe-maker's planet' and a 'planet of women'."
- Murray Hope, Practical Egyptian Magic

"The Dogon say that their astronomical knowledge was given to them by the Nommos, amphibious beings sent to earth from the Sirius star system for the benefit of humankind. The name comes form a Dogon word meaning 'to make one drink', and the Nommos are also called Masters of the Water, The Monitors, and The Instructors. They came to earth somewhere to the northeast of the Dogon's present homeland. When their vessel landed (after a 'spinning or whirling' descent and with a great noise and wind), it skidded to a stop, scoring the ground....At that time a new star (perhaps a mother ship) was seen in the sky."
- Mysteries of the Unexplained (from Robert Temple, The Sirius Mystery)

Salon has a great interview with Alan Moore. Unfortunately they insist on charging people to read it (or you can get a free day pass by watching an ad). This interview is important enough that I've archived it as a PDF for those folks who aren't Premium Subscribers. Enjoy!

One of the reasons we singled out media... was because it is one of the most useful tools of tyranny. We invite it into our own home every night; I'm sure that some of us think of it as a friend. That might be a horrifying notion but I'm sure there are people who think of television as perhaps one oftheir most intimate friends. And if the TV tells them that things in the world are a certain way, even if the evidence of their senses asserts it is not true, they'll probably believe the television set in the end. It's an alarming thought but we brought it upon ourselves. I mean, I think that television is one of the most diabolical -- in the very best sense of the word -- inventions of the past century. It has probably done more to degrade the mind and intelligence of its audience, even if they happen to be drug addicts or alcoholics; I would think that watching television has done more to limit their horizons in the long run. And it has also distorted our culture.

TV and politics have always made inevitable bedfellows, but the results have been disastrous. Look at the situation we have now. Let's say that tomorrow someone who is a political genius were to emerge -- and I'm not expecting this to happen, but say that it did. Say that a politician emerged who seemed, for once, basically competent, who seemed to be able to do their job as well as the average cab driver, comic writer or journalist. If they were the most intelligent, visionary, humane political thinker in the history of mankind, but were also fat, had some sort of blemish or something that made them less than telegenic, we would not be able to elect them. All we're able to elect are these telegenic, photogenic crypto-Nazis. As long as they look good. I suppose it's too early to go into my rant on Ronald Reagan? That would be tasteless. 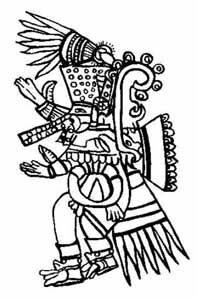 Re-reading Morrison's The Invisibles got me thinking about Aztec dieties. Here's one of the prominent one's in Lord Fanny's shamanism. Seems that he still walks the Earth...

TEZCATLIPOCA, (god of Night and Sorcery) "Smoking Mirror" (obsidian), characterized as the most powerful, supreme deity, was associated with the notion of destiny. His cult was particularly identified with royalty, for Tezcatlipoca was the object of the lengthy and reverent prayers in rites of kingship.

The creator God - The God of the Hunt - Patron of Princes - God of Providence. The Lord of the Here and Now - The Enemy on Both Sides. The true invisible god who walked over the heavens and surface of the earth and hell. Where ever this god went wars, anxiety, and trouble were sure to follow. Tezcatlipoca was thought to incite wars against one another and was called Necocyautl, which means "sower of discord on both sides".

Here's a nice php utility that casts an I-ching hexagram with interpretations based on Discordia.

This hexagram represents a splitting apart (or a 23-Skidooing). It does not futher one to go anywhere, or you might get shot down in the street in front of a movie theatre or something as equally inconvenient. Just stay at home and play Cooknote Fiberglass or something and send your double to the theatre to get shot.

[I think I got this link from DRT not too long ago...]

Brother Can You Spare A Job

[Thanks to Boing Boing.]

Just got caught up on Jason Louv's blog and his shamanic travels through Tibet (which, conicidentally, is a personal fantasy of my own that has been on my mind a lot lately). Yes, today I'm living vicariously through a 22-year old ex-UCSC student living in New York, working for Disinfo, and taking lessons from Tibetan shamen. Louv is currently working on Generation Hex for Disinfo.

An excerpt from his blog:

For my latest adventure, dear companions, you must imagine me in a rented room clogged with incense and kerosene fumes, slowly beating a drum while I wait for trance to overtake me. Outside, soldiers furtively clutching carbine rifles pace under barbed wire, trying to ignore the howling of the jackals in the hills. As I begin to drum faster something begins to unfurl in my mind like the sly grin of the Chesire Cat. It is then that the trance begins, and as I open up into the infinity of self, just at that instant, the power cuts on the entire block. Imagine me sitting crosslegged in front of a massive rice and colored sand mandala, wearing nothing but my Nike shorts, a hat made from five foot tall peacock feathers, a string of bells, and two necklaces made of wood beads meant to represent Kali's necklaces of human skulls. This is how we induce trance. With the elder Jhakri shaman on my left saying frantic incantations over me and flinging water and dried rice at me (hard) while I pound the drum so hard with a snake-stick that my right index finger erupts in blisters, eyes rolled back into my head and screaming like the heat-death of the universe until my central nervous system overloads and leaves me shaking uncontrollably across the floor in the slick of my own sweat, while a lithe naked boy dances around the periphery blowing the Azathothian music of chaos on the hollowed-out legbone of a Bengal tiger.

And that, dear friends and readers, is how we bring the ROCK.

Blog of the Day